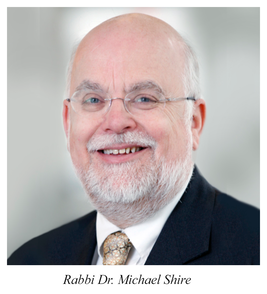 Rabbi Dr. Michael Shire joined Central Reform Temple of Boston as part-time rabbi of the congregation on July 1, 2022. Upon receiving the news of his appointment Rabbi Shire said, “I am delighted to be invited to serve as spiritual leader of this warm and inclusive congregation with its roots in a radical Liberal Judaism and its significant covenantal relationship with Emmanuel Church; a means to provide hope, inter-religious engagement and combined advocacy and action for our neighbours and our city.”

Michael Shire grew up in the UK in the Liberal Jewish Movement and studied for a BA Hons in Hebrew and Jewish Studies at University College London. He subsequently enrolled at Hebrew Union College - Jewish Institute of Religion in New York for a Master’s in Religious Education and then a PhD in Jewish Education at HUC-JIR and University of Southern California in Los Angeles. Concurrently he served as Director of Education at Temple Beth Hillel, a large Reform Temple in the San Fernando Valley. He returned to the UK to become Director of the newly established Centre for Jewish Education and studied for rabbinic ordination at Leo Baeck College in London. Working as a Jewish educational leader, he served a number of part-time and High Holy Day pulpits in Britain and Ireland and he is currently the High Holy Day rabbi for the Oxford Jewish Centre in the UK. In 2005 he became the fulltime Sabbatical replacement for the senior rabbi of Temple Rodef Shalom in Falls Church, VA, one of the largest Reform synagogues in the United States.

In 2011 Rabbi Shire and his family relocated back to the United States to take up the position of Dean of the School of Jewish Education and Chief Academic Officer at Hebrew College in Boston. In 2022 Rabbi Shire will assume the position of Professor of Jewish Education at Hebrew College as he takes on the part-time spiritual leadership of Central Reform Temple. He continues as the founder director of Torah Godly Play, a Torah pedagogy based on his research on the spiritual life of children and as a trustee of The Pursuit of History which sponsors History Camp Boston and other programs for history lovers.

Rabbi Shire is married to Rabbi Marcia Plumb, Senior rabbi of Congregation Mishkan Tefila in Brookline. They have two adult children, Anya is a senior at Brandeis University majoring in Studio Art and Psychology and Micah is a 2nd year Chemical Engineering student at the University of Edinburgh in Scotland.

Rabbi Shire follows Rabbi Howard A. Kosovske who has served as interim rabbi  July 2020 to June 2022 after the retirement of our founding rabbi, Howard A. Berman. ​